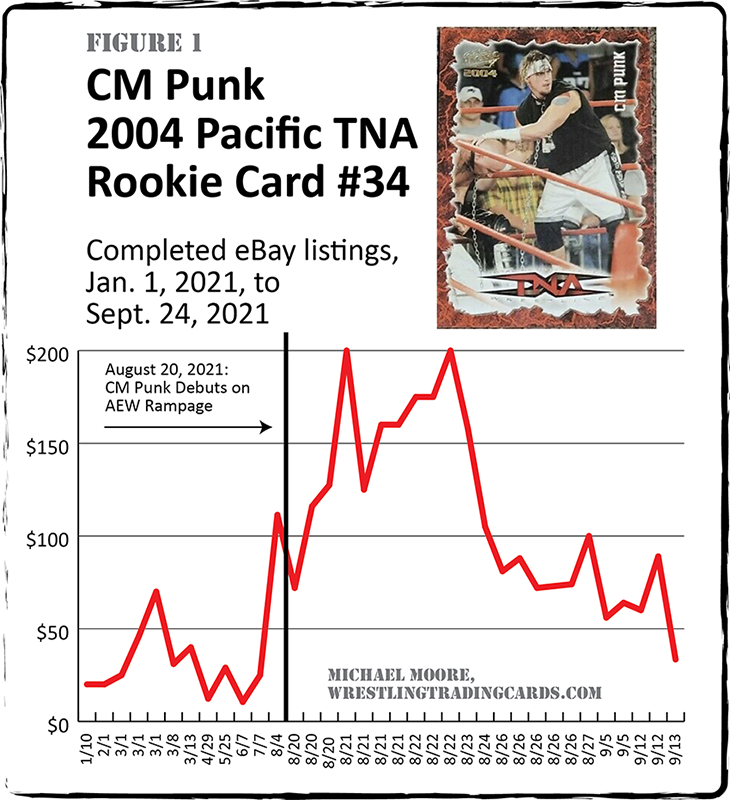 So what exactly do those two initials stand for in CM Punk’s name? Cookie Monster? Chick Magnet? Chicago Made?

Given his popularity with wrestling collectors, they could also stand for “Card Majesty.”

Ever since rumors of AEW signing Punk debut started raging in July, sales of Punk’s trading cards have increased exponentially in both value and volume. After his debut on AEW Rampage on August 20, card sales exploded.

Punk’s earliest card is from the 2004 Pacific TNA set. While some collectors knew about this card for years, most really became aware of it during the “Summer of Punk” in 2011. At that time it started receiving a rookie card designation, and collectors of all things Punk had to have one.

Sale prices of this card have been extremely volatile over the last decade: high during Punk’s main event WWE run from 2011 to 2013, then somewhat lower while he was away from wrestling and giving mixed martial arts a try.

Figure 1 tracks completed eBay sales of this card since the start of the year. It includes both the basic version and the red parallel, which were inserted three in every five hobby packs. Prior to Punk’s August 20 debut on Rampage, the median sale price for one of these cards was $27.00. In the week after the show aired, there were nearly 20 sales with a median price of $120.50. Sales have slowed somewhat since then, but still seem to be in the $60-$90 price range.

Since 2007, Punk has appeared in many trading card sets, mostly WWE and UFC releases from Topps. Upper Deck also included Punk in a variety of products from 2015 and 2016, including 2015 Contours Hockey and the super premium 2015 The Cup Hockey. Punk also signed several cards for Upper Deck’s multi-sport product, Goodwin Champions, in 2016.

Since that product was released, Punk’s basic signature from 2016 Goodwin Champions has been his most affordable certified autograph. Anyone looking for a cheap Punk Autograph could easily find one of these on-card beauties for under $20.

As shown in Figure 2, prior to August 20, all completed listings of this card ended well below $50; in fact, all but one ended at $25 or less. Since Punk’s AEW debut, however, prices of this card have skyrocketed, including sales of $200 and $147.

Because Goodwin Champions is a product that doesn’t feature licenses from major sports promotions such as the NFL, NBA, MLB, UFC or WWE, these cards often sell for less than cards from other comparable products. However, the Punk card is unique because it features an on-card signature, whereas all of Punk’s autographs from Topps WWE products had sticker autos.

Figure 3 tracks sales of four comparable Topps WWE Autographs: 2007 Action, 2007 Heritage III, 2008 Ultimate Rivals, and basic 2010 Topps. These cards have historically sold for similar prices, so using all four of these in one graph makes it easier to distinguish a trend in sales.

From January to June, most of these autographs sold for $30 to $50, with a median sale price of $46.23. Figure 3 clearly shows a trend of increasing sale prices in July and August, as word began to spread that Punk had signed with AEW. After Punk’s debut, the median sale price for these four cards was $105.

Punk’s most recent trading card was sold by Upper Deck as an AEW Preview Card as an e-Pack exclusive. The card was initially sold online for a week for $5.99. The card is sold out now, and the physical copy of the card can be mailed to those who purchased one in six to eight weeks. The digital copies are already reselling on eBay for as high as $50.

There is no shortage of CM Punk trading cards. There are plenty of base, inserts, parallels, memorabilia, and autograph cards dating back to 2007. However, anyone wanting to buy one of these cards is likely going to spend much more than they would have a few months ago.

Punk is probably the most popular and talked about wrestler in the world right now, which should keep collectors chasing his cards for the foreseeable future.